Heat stress is one of the greatest challenges faced by dairy farmers in many regions of the world.  Warm climates depress feed intake, milk production, and reproductive performance  in cows.

In this document, the negative effects of heat stress on production and welfare of dairy cows are described, as well as some of the strategies that can be used to reduce these effects. Moreover, as an example, the case of the Argentine group Chiavassa, which successfully combated heat stress on a farm of 1000 dairy cows, is presented.

Heat stress is a major factor that reduces milk production in dairy cows. Indeed, up to 10% of the variability in milk production has been attributed to the effect of climatic factors such as temperature. The decrease in milk production under heat-stress situations is directly linked to a reduction in feed intake, while the energy needs of the animal increases. In addition, heat stress reduces protein and fat contents in the milk, inhibits rumination and causes immunosuppression, thereby increasing the incidence of some diseases. Finally, heat stress drastically reduces reproductive performances by reducing the synthesis and release of LH and GnRH, which are essential hormones for the ovulation and expression of oestrus behaviour.

WHAT DOES THERMAL STRESS MEAN?

Thermal stress varies according to the breed. Moreover, factors such as milk production levels, the quantity and quality of food, health status and hydration levels of the animal can strengthen the effects of high temperatures. Thus, for example, a high-producing cow (more than 30 kg/day) generates 48% more heat than a dry cow, thereby presenting a higher risk to suffer heat stress. Cows at the beginning of lactation are also more likely to suffer heat stress. The dramatic increase in heat production by the animal is due to both an increase in milk production and food ingestion.

HOW CAN HEAT STRESS BE REDUCED?

The effect of heat stress on dairy production should be minimized by combining strategies with a low investment cost while being feasible in terms of handling and additional management.

Strategies to combat heat stress include the provision of shade for the animals, the modification of the diet, optimization of water intake and the use of water-spray systems and ventilation.

It is estimated that digestion processes generate an increase of up to 20% of heat production from the basal levels. Consequently, and as just mentioned, one of the main effects of high temperatures is a reduced food intake. Some strategies to reduce thermal stress are (1) increasing fat supply in the diet in order to increase energy density, (2) avoiding an excess of total and degradable protein contents, (3) optimizing fibre digestibility, especially in high-energy diets, and (4) providing food at the first and end of the day. Some authors emphasize the effect of fungal cultures on body temperature and respiratory rate when administered during periods of hot conditions.

At ambient temperatures above 25°C, convective heat loss is markedly reduced, and heat dissipation mostly depends  upon  water evaporation  from  skin  and  upper  respiratory airways. Therefore, increased productivity in warm climates will mostly depend on improved heat dissipation by modification of environmental heat load and increasing heat loss from the animal's surface. 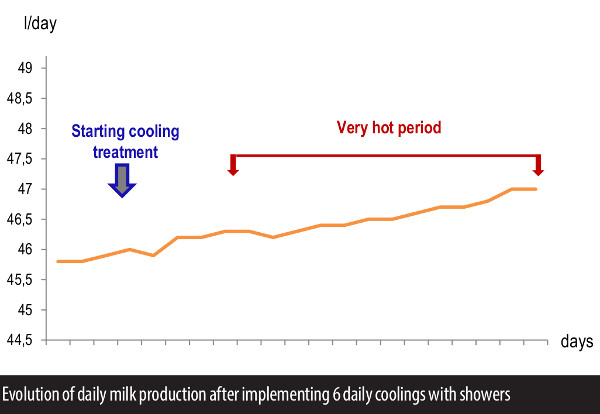 In 2014, the Chiavassa Group, from Argentina, successfully implemented a strategy to mitigate heat stress: cooling cows with six daily baths combining showers with ventilation. The benefits of this practice on milk production and conversion index were very pronounced.

The Chiavassa dairy farm is located in the province of Santa Fe, in Argentina, and houseds around 1,000 Holstein cows milked in a confined TMR diet, with a batch of 300 highly productive cows.

The management measure to minimize heat stress consisted of cooling the cows in the waiting pen, not only at each of the three milkings but also three more times per day, when they are brought into the waiting pen to be refreshed for 45 minutes.

According to Flamenbaum et al. (1986), the only guarantee to obtain a positive impact on productive and reproductive performances is to keep the body temperature of the cows below 39°C, 24 hours a day, through several daily cooling sessions. It seems that on hot days, refreshing the cows just before milking alone is not enough.

Applying this strategy, the Chiavassa farm managed to maintain milk production without being affected by the heat wave.

"Milk yield declines by 0.2 kg per unit increase in the temperature and humidity index (THI) when this index exceeds 72"

Berman  A,  1971.  Thermoregulation  in  intensively  lactating cows in  near natural conditions.  The Journal of Physiology, 215:477

Flamenbaum I, Wolfenson ID, Mamen M, Berman A, 1986. Cooling  Dairy  Cattle  by  a Combination of  Sprinkling and  Forced  Ventilation  and  Its  Implementation  in  the  Shelter System. Journal of Dairy Science, 69:3140-3147