The term “stress” has been widely used in biology to describe a set of physiological and behavioural changes elicited by aversive stimuli. In 1929, Cannon described stress as the sympatho-adrenomedullary (SAM) system's attempt to regulate homeostasis when threatened by a variety of aversive stimuli or stressors. Later on, Selye conducted some of his classic studies on the response of the hypothalamic-pituitary-adrenal (HPA) axis to noxious stimuli and suggested that the organism reacted in a non-specific manner to a wide variety of aversive stimuli, mainly with an increase in the HPA axis activity. 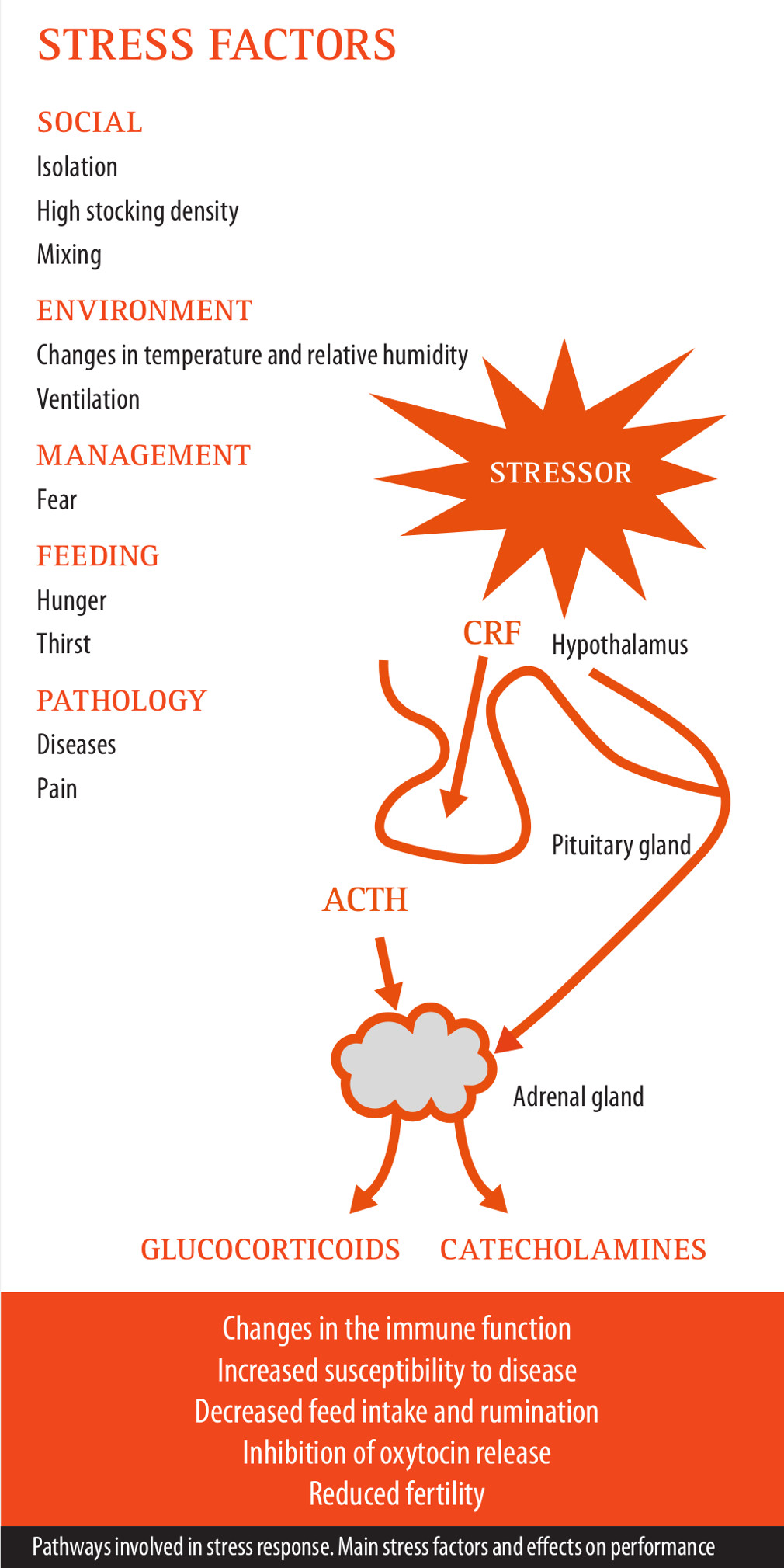 Both the HPA axis and the SAM system are generally considered to be the two main elements of the stress response and plasma levels of glucocorticoids have been widely used as measures of stress. The problem with this approach, however, is that the HPA axis and the SAM system have a crucial function in energy mobilization and redistribution of nutrients to active tissues and both aversive (e.g. fighting) and rewarding situations (e.g. play and mating) may elicit a similar physiological stress response. Therefore, if stress is perceived as potentially negative, it may be misleading to consider stress as a synonymous of the HPA axis activation.

On the other hand, there is now sufficient evidence showing that it is not the physical nature of an aversive stimulus that has negative consequences on the animal but rather the degree to which the stimulus can be predicted and controlled. As a result, it has been suggested that the term "stress" should be restricted to conditions where an environmental demand exceeds the regulatory capacity of the organism, in particular when such conditions include unpredictability and uncontrollability.

Current research on stress biology has addressed the role of the brain. Several areas of the brain are involved in the organization of responses to aversive or threatening stimuli, and these areas interact extensively. Neurons in the hypothalamus, for example, are sensitive to internal physicochemical stimuli and to external physical and psychosocial stimuli. To a great extent the stress response is mediated by the corticotropin releasing factor (CRF) that is secreted mainly by the paraventricular nucleus of the hypothalamus.

Stressors can be conveniently divided into physical stressors, social stressors resulting from the interactions with individuals of the same species and stressors related to handling by humans. Stressors have additive effects. This means that when several stressors impinge upon the animal at the same time, the resulting stress response will be much higher than if the animal was exposed to one stressor only. Therefore, circumstances such as weaning and transport can be particularly difficult for the animals.

How can stress affect performance?

The stress response includes several changes that may have negative effects on the performance of farm animals. These effects include changes in the immune function and increased susceptibility to disease, decreased feed intake and rumination, inhibition of oxytocin release, and reduced fertility, among others. In this fact sheet we will address the effect of stress on susceptibility to disease, feed intake and rumination.

Immune function and susceptibility to disease

Stress can suppress immune function. However, the ways in which chronic stress suppresses the immune system are highly specific, and only some types of defense against disease are affected. When the stress response involves the release of glucocorticoids or catecholamines, the capacity of cellular immune mechanisms is reduced. In practical terms, this means that some disorders are more likely to be precipitated by chronic stress than others. These include respiratory infectious diseases and Salmonella sp. infection. For example, transport stress has been shown to increase pneumonia caused by bovine herpes virus-1 in calves, pneumonia caused by Pasteurella sp. and mortality in calves and sheep, and salmonellosis in sheep and horses.

Susceptibility to other diseases can also be increased as a result of situations which are likely to be stressful. For example, several studies have shown an increase in the prevalence of mastitis in dairy cows as a result of chronic fear. Although the precise mechanism explaining this effect is not know, it has been suggested that the function of the natural-killer cells could be impaired as a result of stress and this in turn could lead to an increased susceptibility of the mammary gland to infectious agents.

The stress of weaning is known to increase the risk of digestive disease in several species. This issue will be dealt in a separate fact sheet.

The negative effect of stress on feed intake has long been recognized, although the precise pathways involved are still debated. It is likely, however, that the inhibitory effect of stress on appetite results from a complex interplay among leptin, glucocorticoids and the CRF.

There is some evidence suggesting that stress may have an inhibitory effect on rumination and this in turn may reduce feed digestibility and therefore performance, and may also increase the risk of ruminal acidosis. The precise mechanism underlying the effect of stress on rumination is not know, but it is interesting to highlight that brain activity during rumination is similar to that during sleep, and stress is known to interfere with sleep.